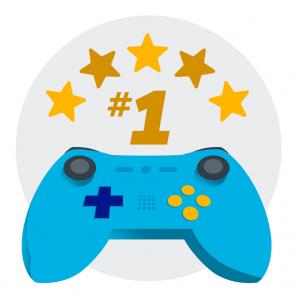 Element's new gaming monitors are equipped with all the features you need to level up your gaming! Today, there is a mirid of PC games available to play, so we rounded up the top 5 games from some of our favorite in-house gamers. They also gave us a brief rundown of the games for those trying to pick a new game to dive into.

Mass Effect is a role-playing action game where humanity is threatened by an alien race known as the Collectors. Set within the Milky Way galaxy, you assume Commander's role from a third-person perspective and gain the loyalty of a diverse team to stop the enemy. You can choose to import a character from a completed saved game of the original Mass Effect or start the game as a new character – importing an old character allows decisions you made in the original game to impact the story of Mass Effect 2.

Dead Space is a science fiction, survival horror game set three years after the first game's events. You'll control Isaac Clarke from a third-person perceptive. Throughout the game, the player will come across different puzzles that impede progress. In some cases, Isaac must hack consoles to activate machines and open doors; in others, Isaac must repair or reposition mechanisms to proceed. This game has a multiplayer mode pitting two four-player teams against each other in different locations and scenarios. The players complete various mission objectives before time runs out, such as activating escape pods and destroying machines, while the necromorphs prevent the humans from completing said objectives. There are two rounds per match, with each team switching sides at the end of the round.

The Witcher is an action role-playing game based on The Witcher series of fantasy novels written by Andrzej Sapkowski.  The game occurs in a fictional fantasy world based on Slavonic mythology, and players control Geralt of Rivia, a for-hire monster slayer known as a Witcher. You battle the game's dangers with weapons and magic, interact with non-player characters, and complete quests to acquire experience points and gold – which you can use to increase abilities and purchase new weapons. The game's story has three possible endings determined by the players' choices at crucial points in the narrative.

Since 2017, Fortnite has taken the gaming world by storm! Gamers can play Fortnite in three different game modes: Save the World, a player vs. environment game where four players collaborate towards a common objective on various missions. Players take the role of commanders in a post-storm Earth where 98% of the population has disappeared, collecting resources, saving survivors, and defending equipment.  In Battle Royale mode, up to 100 players can join for a player vs. player game. Weaponless players drop from a "battle bus" and must scavenge for weapons, items, resources, and vehicles trying to stay alive and eliminate other players. This mode is played in rounds, and the last player, duo, or squad remaining is the winner. In Creative mode, players are given the freedom to spawn everything within the game on an island and can create their battle arenas, racecourses, challenges, and more.

LOL is a multiplayer online battle arena game; two teams of five players battle in player vs. player combat, defending their half of a map. Each player controls a champion with unique abilities and different styles of play. During a match, champions become more potent by collecting points and purchase items to beat the opposing team. League of Legends is cited as the world's largest esport and has an international competitive scene with 13 leagues. The North American league has even broadcasted on ESPN!

Do any of these games sound like fun? When you're on your mission to pick them up, be sure to head to our Gaming Set-Up blog to find out what else you need to level up on your Element Gaming Monitor!

Get our newsletter delivered straight to your inbox and receive Element updates and exclusive offers!